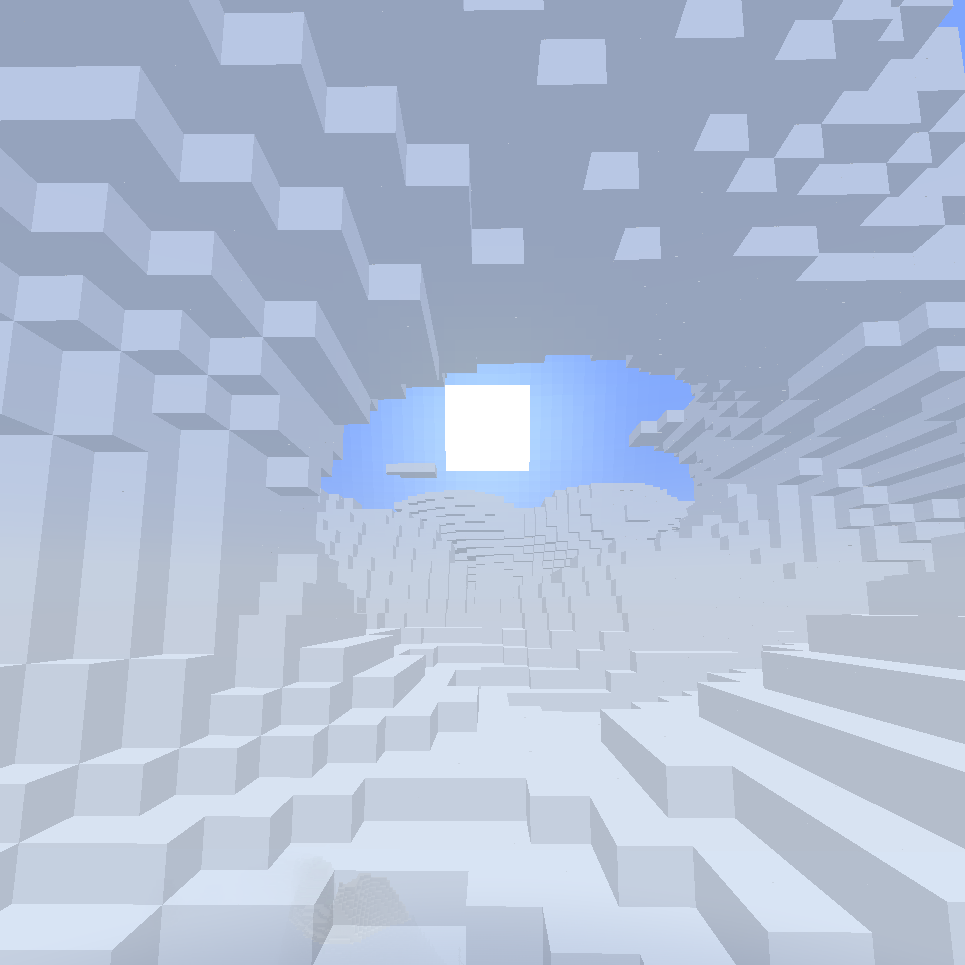 Cubic Skies is my second mod, and the first one to change vanilla gameplay instead of just the visuals. The mod's clouds and weather is based on a suggestion by Axoladdy called Up, Up, and Update: Sunshine Edition. I actually always wanted to see the voxel clouds from this suggestion ingame since the first time I saw the suggestion a few years ago, but no one was making UUaU into a mod so I decided to do it myself. 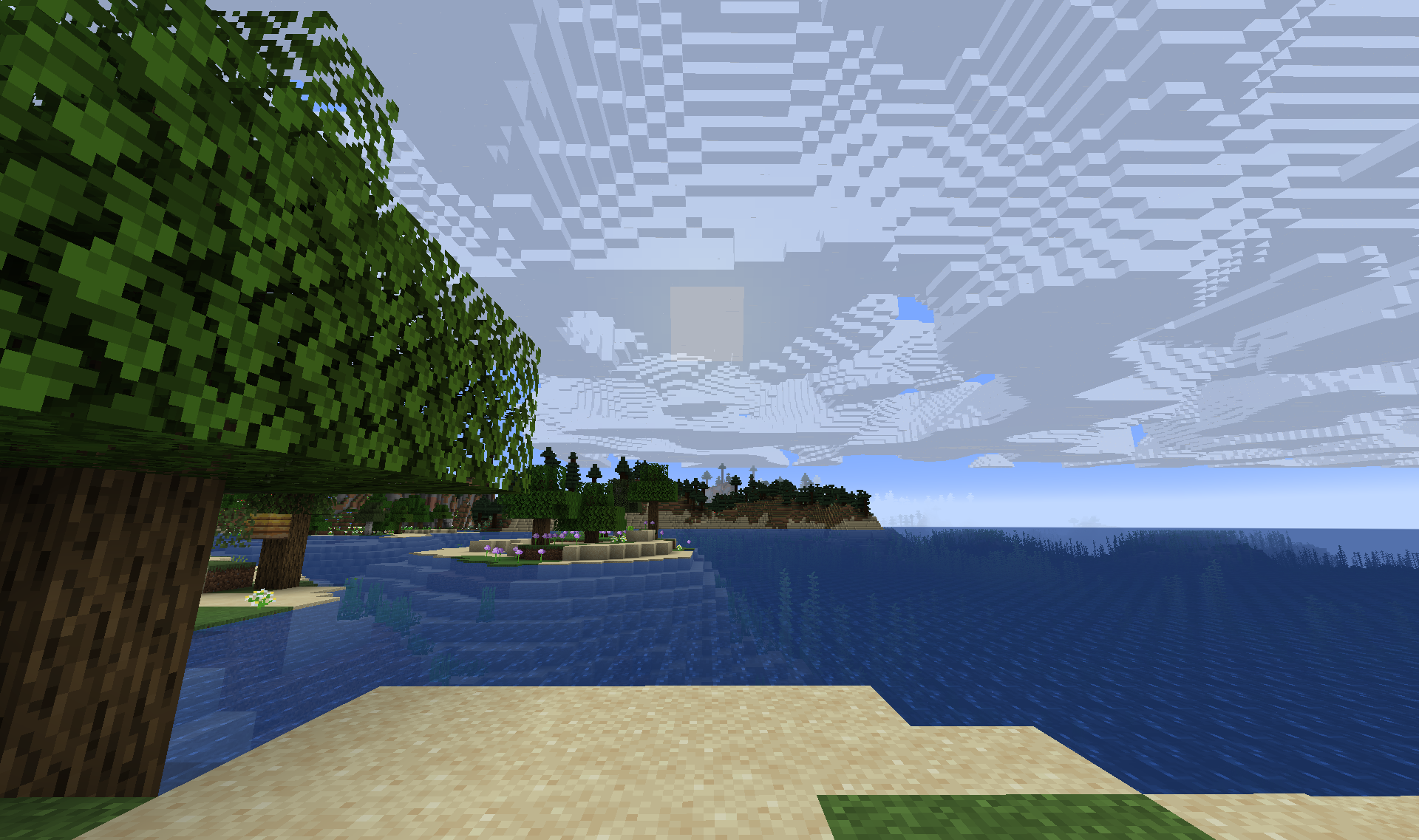 At their greatest height range—which would be during a thunderstorm—clouds go from normal cloud height to y300 (y192 - y364 in 1.18) meaning that clouds are 172 blocks tall at their max.

Why not make Cubic Skies a part of Fabulous Clouds instead of it's own mod?

There are many reasons why voxel clouds and the weather rework aren't a part of Fabulous clouds, but here are most of the main ones:

The biggest difference between Fabulous Clouds and Cubic Skies is that Fabulous Clouds is not meant to actually change vanilla gameplay and is designed to be entirely client-side so it's able to work on multiplayer without the server adding the mod. Fabulous Clouds is also highly configurable and every feature is toggleable. Cubic Skies changes vanilla gameplay and is both server-side and client-side so both the client and the server have to have to mod installed. Cubic Skies isn't going to have anywhere near as much configurability, and features will not be toggleable.

Stuff I have considered adding or am considering adding.

Make a cloudgen api that allows people to edit cloudgen, using either datapacks or by allowing other mods to edit cloudgen. This is definitely going to be a thing in the future, just probably not right now.

Moon phases change cloud and fog color. Would fit better into Fabulous Clouds, but if I end up having to make my own version of vibrant clouds I might add this to both. It could also become a part of a mod that makes the night sky look better. (Starry Night?)

Lift and Drag status effects. I have not yet decided on whether I will add these or not.

Clouds shrink and grow as they move, never intersect with the terrain, pile up against mountains, and burn away over deserts. This would be very laggy because I would have to constantly redraw the cloud vertices as the clouds move over new terrain. There would also be artifacts because of terrain not being generated before suddenly appearing.

The rest of Up, Up, and Update. If I ever do this the rest of UUaU is becoming its own mod.

Cubic Skies is in its early development phase and will be released when it is ready. In the meantime you can build the source code yourself or find a prebuilt version in github actions. Contributing to the project helps make it get done faster. If you want to contribute to the project please do. I have no idea how to do cloudgen.

This minecraft plugin adds @a, @p, and @r to EssentialsX Commands! Works with command block and console aswell!

A data dumper and typing generator for the KubeJS functions, constants and classes.

ProbeJS A data dumper and typing generator for the KubeJS functions, constants and classes. Great thanks to @DAmNRelentless, @LatvianModder and @yeste

Konas Client de-obfuscated and manually remaped by Gopro336, Perry, and other based people

An experimental toolset for Unity asset and asset bundle files.

A Java game development framework that deploys to JVM, HTML5, Android and iOS.

A Minecraft Map Editor... that runs in-game! With selections, schematics, copy and paste, brushes, and scripting! Use it in creative, survival in sing

This mod makes the clouds look much better.

Fabulous Clouds is a 1.17 Fabric mod that makes minecraft's clouds look much better. It isn't going to be ported to Forge or be backported. Fabulous C

A Minecraft Mod for Fabric which aims to make Block Entity rendering faster and more customizable with almost no compromises.

PronounMC is a Minecraft plugin designed to make it easier to keep track of pronouns.

PronounMC PronounMC is a Minecraft plugin designed to make it easier to keep track of pronouns. Supported pronouns He She They It Any Other Ask Userna

Note New version of Jetserver is called Nadron and is in a new netty 4 branch of this same repo. JetServer is a java nio based server specifically des

With the games: brick breakers, tic-tac-toe, snake and tetris With the apps: calculator, stopwatch and text editor Themes, and hyperlinks

please read README to see how to play this. and star me to help me! this is very helpful and thanksful for me.

It's a particle system only appliaction. Made with LWJGL (OpenGL and GLFW for Java) and ImGui.

ParticleParty It's a particle system only appliaction. Made with LWJGL (OpenGL and GLFW for Java) and ImGui. How To Use Move the camera with ctrl + W/

Quick and dirty framework for on-the-fly patching of classes via the java attach api and transformers.

Nuclear Quick and easy framework for on the fly patching of running java applications. Inspiration from an idea of an injectable minecraft cheat. What